So how embarrassing was it to be the son of the man who wrote The Joy Of Sex? He opens up about how his father left his wife to join a free love commune in California

By Frances Hardy for the Daily Mail

Nicholas Comfort, a mild-mannered grandfather in his mid-70s, is the very soul of discretion.

A heritage steam railway enthusiast — he volunteers with the Bluebell Line in West Sussex — cricket aficionado and elder of his local free church in South-East London, he went to public school, progressed seamlessly and with distinction to Cambridge and has enjoyed a career as a journalist, writer and political adviser.

He dresses with conservatism, his hair is neatly barbered and his demeanour youthful. 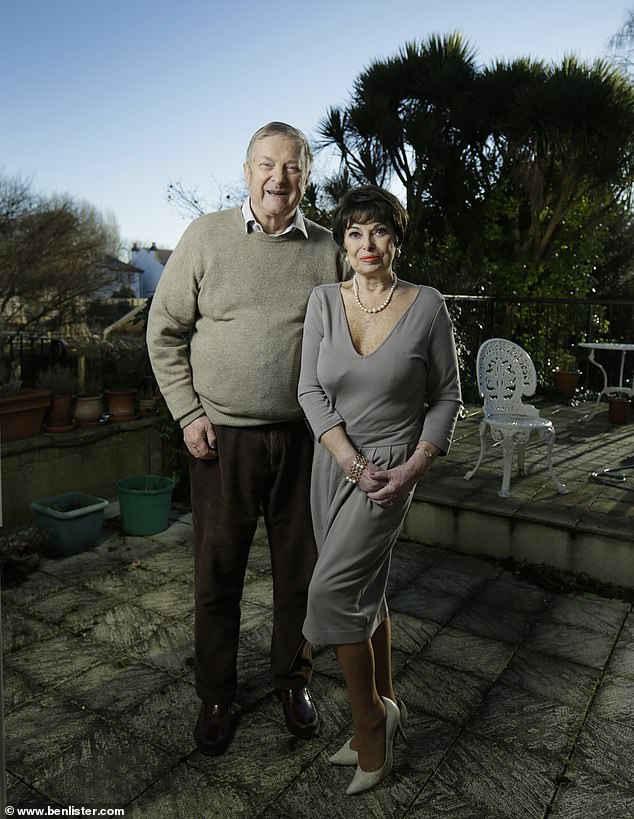 Nicholas Comfort, the only child of the late Dr Alex Comfort who authored The Joy of Sex, and wife Jeanette 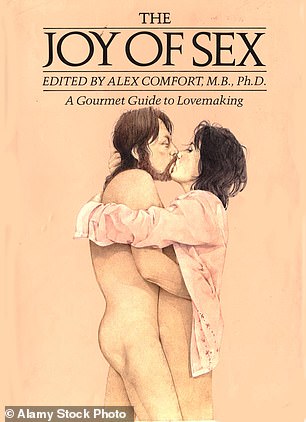 The Joy of Sex, launched in 1972, has sold more than 12 million copies and has been translated into 30 languages

You'd be forgiven for thinking, with his irreproachable credentials and impeccably respectable hobbies, that he was the product of an entirely conventional middle-class upbringing.

Not that his son, it becomes readily apparent, shares his father's ease with eroticism. Bring up the subject of sex and he deflects it deftly.

Was he a proponent of free love as a young man in the Swinging Sixties?

'I was heavily into music. I went to a Pink Floyd all-nighter and saw the Stones at Hyde Park,' he discloses as if this is the most shameful act of depravity.

'But I'm not going to do a Nick Clegg and tell you how many sexual partners I've had,' he adds, somewhat primly. The former Lib Dem leader infamously told an interviewer he had slept with 'no more than 30 women'.

'Let's just say I came away from university a great deal more experienced than when I went to it,' Nick adds in his genial, family-friendly way.

As father-son dynamics go, it's hard to imagine one more polar opposite — although there are hints of mischief beneath Nick's outward conservatism.

He married his third wife, former bunny girl Jeanette, with whom he now lives in South London, after meeting her on a train. Even so, it is much easier to envisage Nick writing a political treatise than a 'how to' book on his bedroom antics.

The Joy Of Sex, with its mix of humour and frankness, piloted us through the mechanics of imaginative love-making, its illustrations showing a couple in the throes of ecstasy, adventurous experimentation and post-coital bliss.

It was divided into Starters, Main Courses and Sauces and Pickles, it was loosely modelled on the Joy Of Cooking; and just as the culinary manual wanted to induce proficiency in the kitchen, Dr Comfort's book aimed to make its readers capable of Cordon Bleu sex.

It has sold more than 12 million copies, been translated into 30 languages and extraordinarily when it was launched in 1972, on an eager public emerging from the constraints of post-War prudishness, it was considered wildly outre.

Half a century ago, The Joy Of Sex caused a similar public furore, yet today its message seems affectingly moral.

'You don't get high-quality sex without love and feedback,' opined its author, who actually enjoyed an extraordinarily racy sex life himself.

While married to Ruth, Nick's mum, whom he met at Cambridge University, Alex Comfort enjoyed an affair with Ruth's best friend Jane Henderson, whom he went on to marry.

Dr Comfort and his second wife then emigrated to America, where they became enthusiastic adherents of free love, joining the Sandstone Retreat, a clothing-optional, open-sexuality resort for swingers in the Santa Monica Mountains.

Poor old Nick. We can only imagine his chagrin.

'My mother was not the most tactile of people and Jane, presumably, was,' Nick says with wonderful understatement.

'Dad was dividing his time between mum and Jane and this arrangement almost became a fixed state.

'But then his research work (into gerontology, the study of ageing) at University College London came to an end, he went to America and 'Joy' came out.

'Dad told me later there were quite a few gerontologists at Sandstone. He said all of them had a chronic fear of their own mortality which made them want to enjoy life more.'

His mother must have been hurt by the betrayal, surely?

'It would have been impossible for her not to have been,' concedes Nick.

'And in an ideal world Dad would have liked not to have made a formal split. But Jane was the needier of the two. My mother was better able to function on her own.

'In fact I think she found Dad's intellectual explosiveness and high-octane mind difficult to live with and, although she was hurt, in some way not having him around gave her a chance to recover.

'Dad was still very fond of Mum and he felt desperately conflicted.'

While Alex and Jane threw themselves into their libertine lifestyle, they were mercifully reticent about the goings on in California whenever they met Nick.

'Ironically, Dad was a fairly private man. He didn't talk about his own sex life. Very few people do. He talked in generalities rather than in the particular.'

Nick was 17 and a boarder at Highgate School in North London when Dr Comfort announced, daringly, on a radio broadcast — this was 1963 — that no responsible teenage boy should go to a party without a condom in his pocket.

'I wasn't embarrassed until people started teasing me about it,' says Nick. 'And they did.'

If he availed himself of his father's advice at that stage, it was redundant. 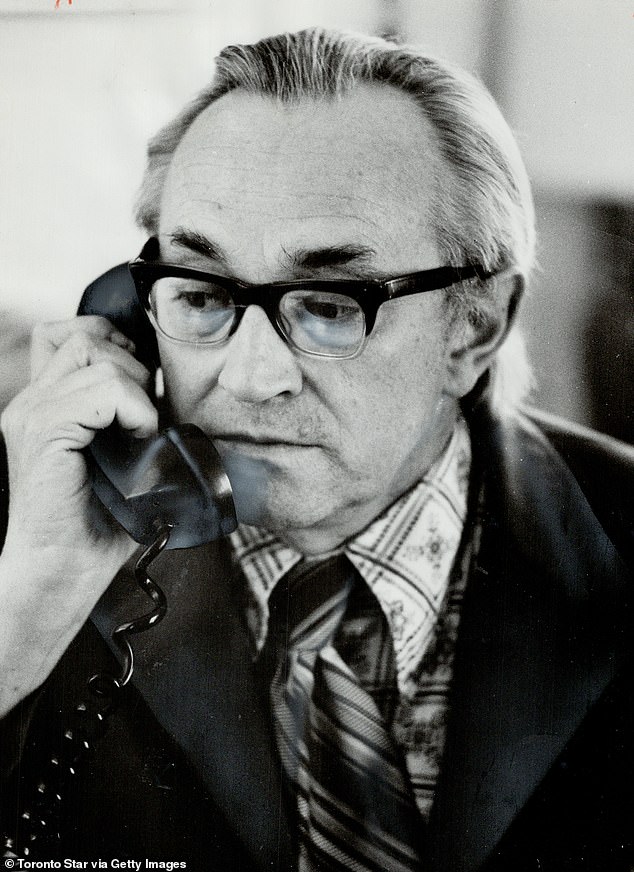 Dr Comfort, pictured, enjoyed an affair with his wife's best friend Jane Henderson, whom he went on to marry

'There was quite a lot of sex going on, but mainly to other people,' he says. 'I wasn't a late developer by the standards of the time, although I was by today's, but the speed at which you developed depended on when you met girls.'

And they were thin on the ground at boys' boarding schools.

'The headmaster was most concerned about stopping homosexual activities in the dormitories. And when we left he gave a speech and said, "Above all, never consort with prostitutes" — which had not figured in my life's ambitions,' he laughs.

Dr Comfort's public declaration about contraception was all the more perplexing because he'd been entirely silent on the matter of the birds and the bees with his own son.

'Before I went to Highgate, aged 13, we got a letter from the head saying he hoped we'd arrive having been told the details of 'personal hygiene', —– as it was described then —– but there was never a conversation with my Dad.

'Most fathers shy away from it — I've certainly never discussed it with my own two sons — and my dad was no exception. The funny thing is, in most ways he was a very conventional man.'

He was, it seems, both progressive and conservative; a curious mix of reticence and outspokenness: although born in 1920 he came to epitomise the liberalism of the Sixties, but alongside this sat the restraint of an earlier era.

And despite his own permissiveness, would the throw-away casualness of today's hook-ups have disconcerted him?

'He was a great believer that sex had its place as part of a caring relationship; not as something purely mechanical. He felt that people's feelings should not be exploited,' says Nick.

'I think he would be disappointed by the growth of unfeeling sex. He would have been sad that young people feel pressured to have sex earlier than ever.

'He felt it was something you'd come to in your own time and in your own way. He welcomed the fact that more people were enjoying it and he wanted them to be properly educated about it.

'But I don't think he would have been happy about very young children being told too much about it either.

Dr Comfort, also a fervent advocate of free speech, would have been 'exasperated' by the current stifling of academic debate on transgender issues.

'He believed passionately in open debate, that people were entitled to express their opinions even if they were at odds with his own.'

When The Joy Of Sex was first published Nick, then 26, was married to his first wife Deborah — twice divorced, he married Jeanette in 2014 — and working in Sheffield as the municipal correspondent of one of the city's daily papers.

He claims to have been relatively untouched by the initial brouhaha surrounding the book, because it was launched first in America, not least to spare his mother's feelings: 'Dad didn't want to upset her any more than she had been. She'd had to put up with enough.'

At the time, too, there was a prohibition on doctors advertising, and fearful that the book might infringe this — and that he could be struck off the medical register — Dr Comfort cast himself as its editor. (In reality, of course, he wrote it.)

How to illustrate it without resorting to 'dirty pictures' that would inflame the censors, was also problematic.

The famously hirsute and impressively flexible duo in the drawings were husband and wife Charles and Edeltraud Raymond. 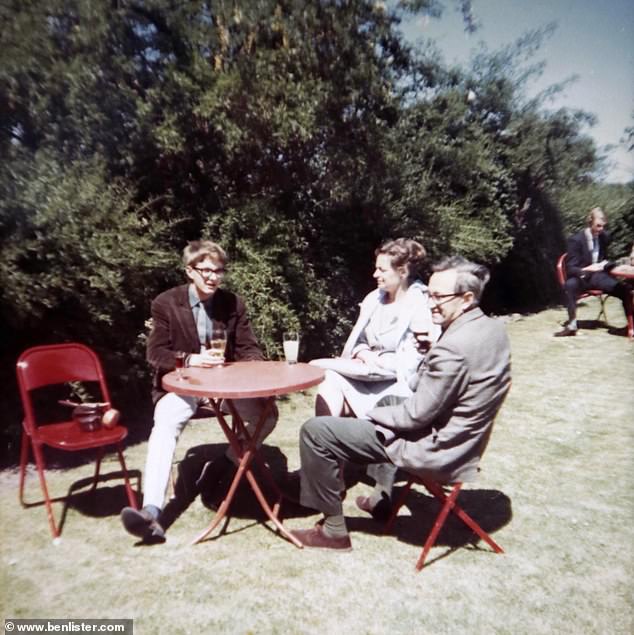 Nick Comfort, pictured at 19 with his father Dr Comfort and mother Ruth in 1966, in Cambridge

Bearded Charles, one of the artists on the book (he usually painted flowers), and German-born Edeltraud, volunteered 'and she got him through the positions with Teutonic efficiency', says Nick.

The sex was not simulated, but real, he says. I remark that they must have been exhausted, rattling through it all at a pace because the garret in which the photos were taken, thanks to the miners' strike, was freezing cold.

'The generations who learned from 'Joy' owe Charles and Edeltraud a lot,' agrees Nick.

'Their tenderness and lack of prurience was exactly what Dad was aiming for.'

Was Nick among those who used the manual to spice up his own sex life?

'Well I read it, of course,' he says, 'and there must have been things that caught my imagination but I didn't model my own behaviour on it. I suppose it was useful.'

'I couldn't have thought of anything less sexy.

'When the plot of one of the films was being recounted, the judge got so hot he had to remove his wig.'

After Dr Comfort and Jane's foray into free love in California, they returned to their roots to live quietly in the lee of a windmill in Cranbrook, Kent.

Jane died five years before Alex had his stroke; he had an amicable rapprochement with Ruth and Nick would often join both his parents for Christmas lunches.

Was The Joy Of Sex a force for good, I ask him. 'Dad would have regarded its values as lasting ones,' he says.

And they are. At the heart of the manual that shocked the world so profoundly half a century ago, is the enduring truth that sex, intimacy and eroticism are at their most intense when they are accompanied by love.

Copy! A Life In Print, Parliament And Far Flung Places by Nicholas Comfort is available on Amazon.