Unravelling the mystery of Sicily's child mummies: British scientists hope to unlock 200-year-old secrets of the Capuchin Catacombs by using X-ray technology to analyse the remains of 41 youngsters

British scientists hope to unlock 200-year-old secrets of the Capuchin Catacombs in Sicily, southern Italy, by using X-ray technology to analyse the remains of some of the 163 children laid to rest there.

The first ever comprehensive study of mummified children in Sicily's famous burial catacombs in the city of Palermo is being led by Staffordshire University.

The Capuchin Catacombs, which hold more than 1,280 skeletonised and mummified bodies, are open to the public as a somewhat macabre tourist attraction.

Bodies dating from the late 16th to early 20th century are still dressed in period refinery and line corridors and crypts of the underground cemetery.

The catacombs include the embalmed body of Rosalia Lombardo, a young Sicilian girl who died of pneumonia brought on by the Spanish flu in 1920. 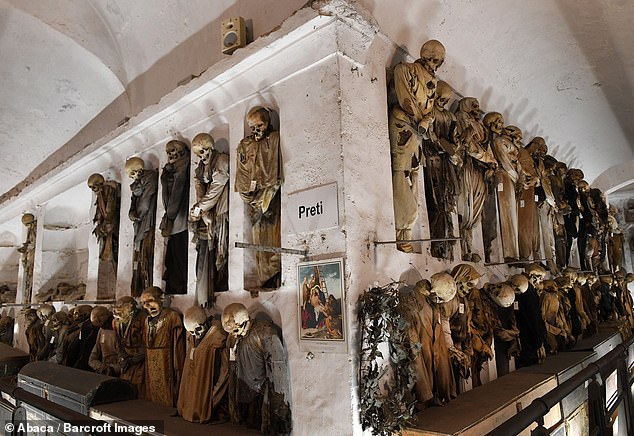 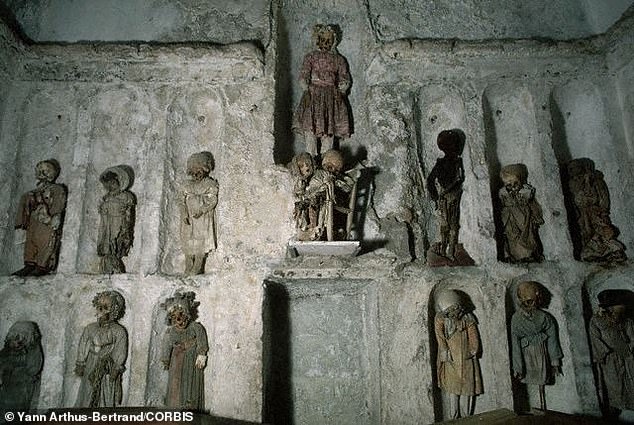 Mummified Bodies in catacombs. Wealthy citizens who died between the 17th and 19th centuries were embalmed by the Capuchin monks of the city of Palermo

The Capuchin Catacombs contain more than 1,280 skeletonised and mummified bodies.

Palermo's Capuchin monastery outgrew its original cemetery in the 16th century and monks began to excavate crypts below it.

In 1599 they mummified one of their number, recently dead brother Silvestro of Gubbio, and placed him into the catacombs.

The cemetery was first reserved for ecclesiastical workers, then accepted deceased from all walks of life, and experienced its greatest popularity during the 19th century.

An inscription hanging from the neck or pinned to the chest, indicates the name, birth and death dates of the deceased.

The cemetery was officially closed by civil order in 1880, but the last burials are from the 1920s.

The cemetery has now become a kind of museum filled with the forgotten dead, who are watched over by a group of Capuchin monks.

Dr Kirsty Squires, associate professor of bioarchaeology, and her team at Staffordshire have been given exclusive access to a previously unstudied collection of children's mummies at the catacombs.

The Arts and Humanities Research Council has awarded more than £70,000 funding for the two-year project, which kicks off later this month.

'Data collection will take a week and then we will carry out archival research in the following week while in Palermo. All images collected will be analysed over the coming months.'

There are at least 163 children's bodies housed in the catacombs, including 41 children located in a designated room for children – the so-called 'child chapel'.

However, very little is known about these individuals, and death records from the period contain limited information, such as just the name of the deceased and date of death.

Dr Squires and her team will examine all 41 children housed in the child chapel who died between 1787 and 1880 using a portable digital direct X-ray machine.

'We are analysing 41 juveniles as we cannot gain access to the remaining individuals as they are located throughout the catacombs and are inaccessible,' Dr Squires told MailOnline. 'We are focusing on individual's in the children’s crypt.'

The X-ray machine will capture digital images of each child from head to toe. It is a non-invasive alternative to destructive techniques such as autopsy.

In total, 574 radiographs will be taken to generate a biological profile of the mummified children to establish whether mummification was reserved for specific children based on factors such as their age and sex.

Radiographs will also detect the presence of developmental defects, stress indicators and pathological lesions, which aims to gain an insight into the health and lifestyle of the children when alive. 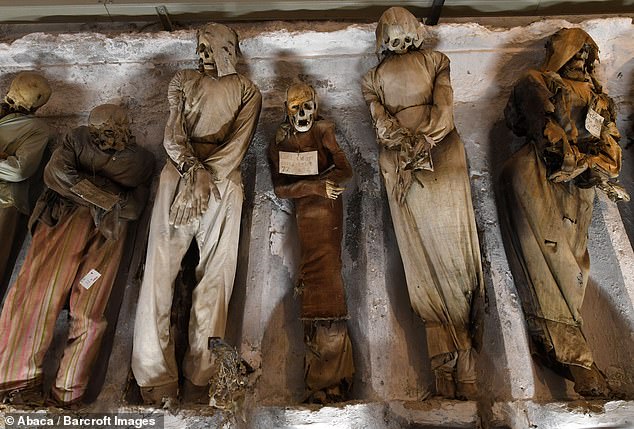 Children were accepted in the catacombs from 1787 but while extensive research has been conducted on the mummified adults, the juvenile mummies have largely been overlooked 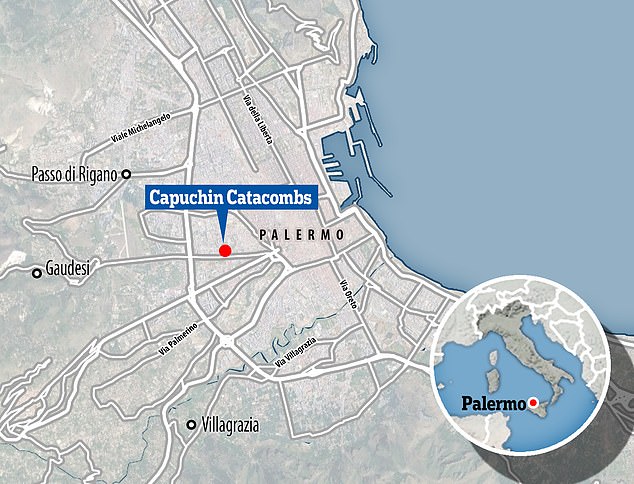 The Capuchin Catacombs in the city of Palermo on the Italian island of Sicily are a kind of museum filled with the forgotten dead, who are watched over by a group of Capuchin monks 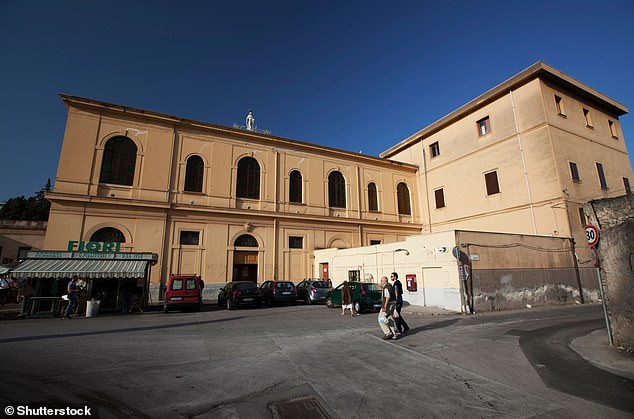 Exterior view of the monastery and catacombs of Capuchins. Today they provide a somewhat macabre tourist attraction

'Determining whether children buried in the catacombs suffered environmental stresses on their body can inform us of living conditions and the environments in which they lived,'  Dr Squires said.

The Capuchin Catacombs contain more than 1,280 skeletonised and mummified bodies.

Skeletonised remains have decayed right down to the bone.

One example of a mummy is the remarkably-preserved body of Rosalia Lombardo, a young Sicilian girl who died of pneumonia brought on by the Spanish flu in 1920.

'This will be compared with the biological attributes of children buried elsewhere in Palermo who were not afforded mummification.'

These findings will be compared with each child's placement in the room, their funerary attire and associated artefacts (such as chairs and canes), mummification type (natural or artificial) and any surviving historical documentation.

Until now, most of the research work on Capuchin Catacombs remains has focused on the adult skeletons, and less on the children.

'The Capuchin Catacombs comprise one of the most important collections of mummies in the world,' Dr Squires said.

'However, there is very little documentary evidence about the children who were granted mummification and the death records from the period contain limited information. Our study will rectify this knowledge gap.

'Given that this funerary rite was mainly reserved for adults, we want to understand why the children were mummified.

'We have a fairly good idea that they were from the upper ranks of society but we don't know much more about juvenile health, development, or identity during this period.'

One exception is the embalmed and incredibly preserved body of Rosalia Lombardo, which has been the subject of media coverage in the 21st century. 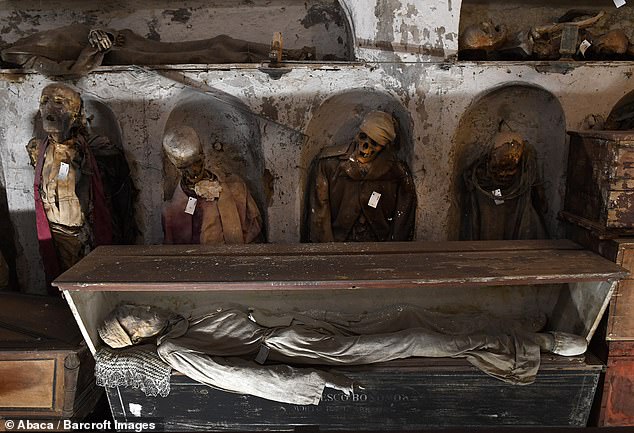 The cemetery was first reserved for ecclesiastical workers, then accepted deceased from all walks of life, and experienced its greatest popularity during the 19th century

The mummy has achieved notoriety for a phenomenon in which her eyes appear to open and close several times a day, revealing her intact blue irises.

Capuchin Catacombs curator Dario Piombino-Mascali has said this phenomenon is due to an optical illusion produced by the light that filters through the glass windows covering her coffin, which is subject to change during the day.

'[Her eyes] are not completely closed, and indeed they have never been,' Piombino-Mascali said in 2014.

Dr Piombino-Mascali, who is working with Dr Squires on the latest project, investigated the preservation of Rosalia Lombardo around a decade ago.

He said several of the child mummies at the Capuchin Catacombs 'look like sleeping children'. 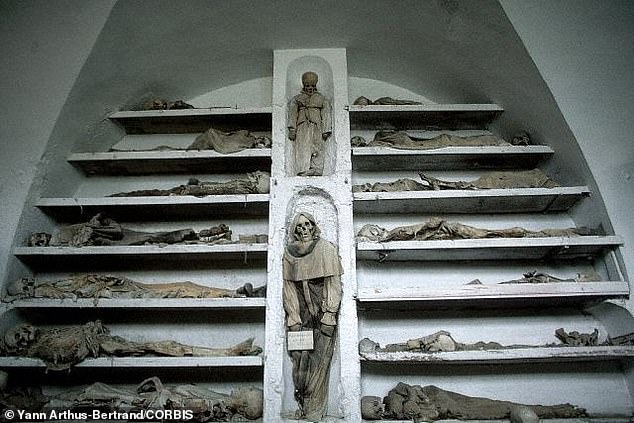 The Capuchin Catacombs is open to the public, for those who feel like spending their day walking amongst the unknown

'Some of them are superbly preserved. Some really look like sleeping children. They are darkened by the time but some of them have got even fake eyes so they seem to be looking at you. They look like tiny little dolls.

'Of course you want to do something to preserve them and to make sure their stories are told and give a sense that they are children. It is very upsetting when you deal with children in anthropology.'

As photography is banned in the catacombs and the subject matter is highly sensitive, artist Eduardo Hernandez will produce illustrations of the juvenile mummies.

These will be shared alongside journal articles, lectures, a blog and teaching packs translated into both Italian and English.

AUTHORITIES IDENTIFY 65 BODIES AND RECOVER 5,000 HUMAN BONE FRAGMENTS THAT WERE DISCOVERED IN A CLANDESTINE GRAVE IN MEXICO

Activists searching for their missing loved ones revealed that 65 bodies and at least 5,000 human bone fragments were recovered from a clandestine grave in Mexico.

The group, Solecito Collective, made the announcement in November as authorities in the Gulf state of Veracruz continue the search for additional corpses and body parts, according to Spanish news agency EFE.

The secret burial spot was discovered near a lagoon in the Veracruz fishing port town of Alvarado back in March 2017.

The search for the burial site located in an area known as El Arbolillo was ordered under the watch of then Veracruz State Attorney General, Jorge Winckler Ortiz.

State and federal authorities spearheaded the search along with the assistance of members of Solecito Colectivo before the operation was abruptly halted only two months after it had been initiated in 2018.

Solecito Colectivo founder Ángeles Díaz Gaona told EFE that the operation was limited to barely five weeks in 2020 due to the COVID-19 pandemic and resumed in February without skipping a beat after the group pressured Governor Cuitláhuac García and State Attorney General Veronica Hernández.

It's believed that the victims were casualties of a long-running war between cartel and the government, and were murdered between 2011 and 2012.

Díaz Gaona estimates that mass grave in El Arbolillo could be much bigger than the one that was discovered in 2016 in the Veracruz town of Colinas de Santa Fe - considered to be the largest to date in Latin America - where 300 bodies and more than 22,000 human remains were removed.

'If we continue (searching) it is possible that it could be,' she said.

Government data shows that 90,148 people have been reported missing in Mexico.

At least 479 clandestine burial sites were located between September 2020 and July 2021. During that period authorities recovered 1,048 bodies, but only identified 239. A total of 96 bodies were returned to families for proper burial.

Thirty years of Hubble: From the Pillars of Creation to the Large Magellanic Cloud, these mesmerising images are among 1.5 MILLION observations the iconic space telescope has made over three decades