Bacteria on Earth may have carried life to distant worlds after being blown into space by high-speed winds, study finds... and could even have arrived HERE from Mars or beyond

By Ryan Morrison For Mailonline

Bacteria may have been transferred from Earth to distant worlds after being blown into space on high-speed vertical winds in the atmosphere, a new study has found.

It suggests the space race may not have been won by the US when Neil Armstrong stepped on the moon, but rather tiny micro-organisms that could have beaten the Soviet Union's Yuri Gagarin into space by thousands of years.

Researchers say their theory also opens up the possibility that life could have arrived here from another planet such as Mars or beyond.

University of Edinburgh experts made the observation after creating a model to estimate the impact of wind speed on biologically-sized particles.

This is much higher than the 47-mile altitude that bacteria spores have previously been discovered at, and at a point considered 'in space'.

Reaching this point would then allow the bacteria to be captured by extremely high speed particles of space dust, and sent off far beyond the Earth into deep space.

Lead author Arjun Berera told MailOnline that this offers 'yet more scientific evidence for the possibility of life transfer between planetary bodies.' 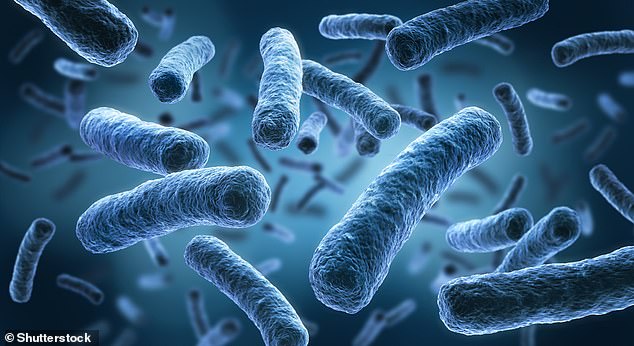 Bacteria may have been transferred from Earth to distant worlds after being blown into space on high-speed vertical winds in the atmosphere, a new study has revealed 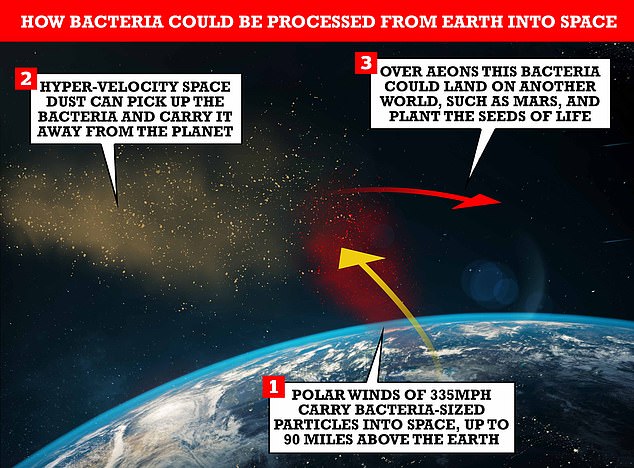 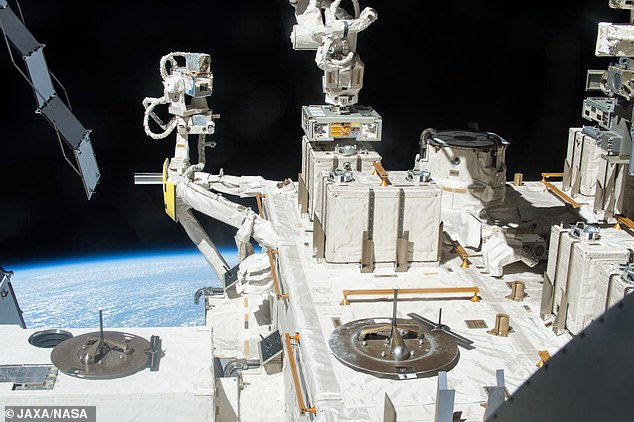 HOW BACTERIA CAN SURVIVE IN SPACE

Bacteria has been shown to survive for up to three years in space, according to scientists who studied colonies of microbes outside the ISS.

Colonies of microbes at least 0.02 inches thick are resistant to the extreme cold and high radiation levels in space, researchers found.

Only those at the surface of the colony die — they sacrifice themselves and form a protective layer for the remaining microbes underneath.

The discovery means these colonies of microbes could travel between Earth and Mars by gathering into 'aggregates' of particles.

Although three years is the length of time researchers discovered bacteria could survive outside the ISS, it is possible that microbes could live for much longer to facilitate long-term space travel.

There is also evidence of some bacteria having the ability to enter a stasis like state — where they effectively shut down bodily functions, and can be re-animated when they reach the right environment.

They suggest this may have happened in the other direction, adding credence to the 'panspermia theory' that suggests life arrived on Earth from another planet.

Professor Berera told MailOnline: 'Its possible if there were say biological particles in early Mars, they may have been propelled into space and possibly landed on Earth.'

However, this paper looked at whether the conditions on Earth are right to allow for particles to leave our planet.

'We find that there is the possibility of these larger particles being carried from the upper mesosphere into the thermosphere,' the authors wrote.

'By showing that it is possible for large, heavy particles to reach these high altitudes, simply by vertical wind transport, interesting possibilities are opened up.'

The biosphere, the area of the Earth where life exists, was previously thought to only extend up to about 50 miles, but the Scottish researchers suggest it may be higher.

Published in the Proceedings of the Royal Society A, they suggest evidence of DNA blown up from Earth has even been found on the ISS, 250 miles above the surface.

Dust samples from outside the space station, taken in 2018, were found to contain 'DNA from several kinds of bacteria,' they write.

Studies of the bacteria suggest it settled while the ISS was in orbit, suggesting they arrived on the station after being blown up from Earth, rather than travelling up to space with the station when it launched in the late 1990s.

Based on these wind speeds, the team determined that bacteria-sized particles could be lifted, and blown up as far as 90 miles or more.

'The cases in our paper did not show particles could reach quite as high at 150km [90 miles], but we think it present plausible evidence that this is possible, but more data and understanding of vertical winds is still needed,' Prof Berera told MailOnline.

'Our estimates using reported observations of large vertical winds show that it is conceivable for such particles to be projected from near the highest measured altitudes in the mesosphere up to 120 km,' the team wrote in the paper.

At this point the particle 'has enough momentum to facilitate the planetary escape', the authors explain, feeding into the chance life can be transferred.

Professor Berera told the Times that it would only take a few biological particles to leave the Earth in order to seed life on another world.

In the early years of the solar system Mars was a warm, wet world, similar to Earth today, where bacterial life may have evolved, transferred to Earth on solar winds.

'If a biological particle escaped Earth and it landed on something that was conducive to life, biology tends to grow quite easily,' Berera said.

'Even if the probability of an escape event happening is quite low, like once every 50 years, if you think about long geological timescales there are a lot of events of potential life transfer that could happen from this mechanism.'

The paper also explores the possibility of particles leaving the Martian atmosphere, suggesting this would be easier due to lower gravity and atmosphere levels. 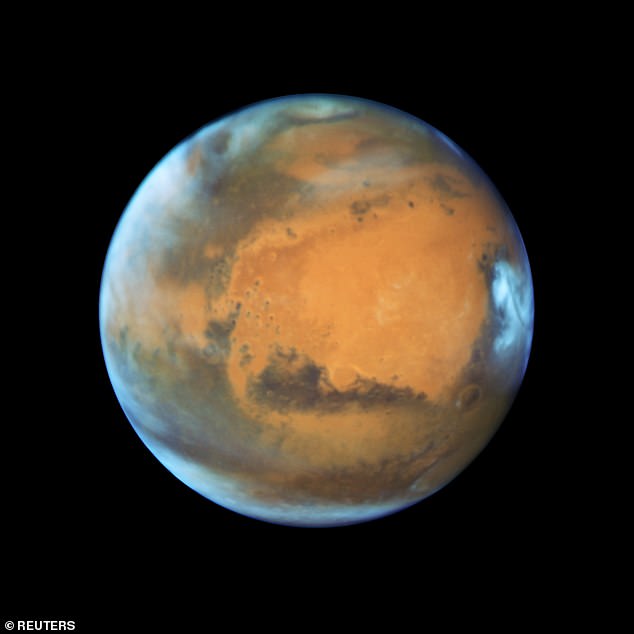 Large dust storms, which at times can cover the entire Martian surface, could be sending particles containing bacteria into space, researchers claim

'Future work could consider the atmosphere of Mars, for which this vertical wind mechanism might be more suitable owing to the frequency of dust storms and the size of the dust,' the team wrote.

The weight of a particle on Mars is 38 per cent less than that on Earth and the air density at the surface is only 1 per cent, with strong vertical winds.

'Vertical particle transport in the Martian atmosphere is therefore likely to be strongly impacted by these storms, which can project dust up to around 80 km.'

'Smaller particles could attach to the dust and therefore reach higher altitudes.

'If biological particles are present on Mars, and if such particles can be found at these higher altitudes, then they could be sampled and studied by satellites or probes such as balloons, without having to land on the planet's surface.'

An area the team didn't explore was the possibility of bacteria from Earth reaching the icy moons of Jupiter and Saturn, that are suspected to have deep water oceans.

'This would be a next question needing planetary dynamics studies,' Prof Berera told MailOnline, adding that the dynamics of the solar system would be a complicated problem in the process of sending bacteria across deep space.

'But in principle the kick that hypervelocity space dust could give to particles in the atmosphere would be enough kinetic energy that in principle it could reach these faraway places,' he explained.

The findings have been published in the journal Proceedings of the Royal Society A.

Bacteria may have transferred life to distant worlds after being blown into space, study claims